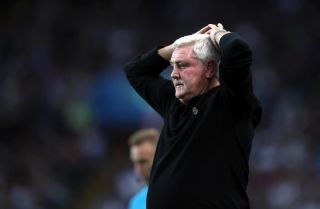 Dean Smith believes Steve Bruce deserves respect when he returns to Aston Villa on Monday after ending his days at the club with a cabbage being thrown at him and the sack.

Bruce spent two years in charge at Villa Park, losing his job last October, just over four months after a defeat to Fulham in the Sky Bet Championship play-off final at Wembley.

Bruce’s final game at the helm was a 3-3 draw with then bottom-club Preston at Villa Park, with Villa throwing away a 2-0 lead and relying on a late equaliser to salvage a point.

With Villa on a run of one win in 10 matches prior to the game, one fan opted to hurl a cabbage at Bruce – rather than verbal abuse – to express his disgust at his performance as boss.

Bruce returns to Villa for the first time since his dismissal as his Newcastle side take on Smith’s outfit.

“I thought it was a disgrace,” said Smith when asked about the cabbage incident. “You don’t want to see that in the ground. I said that at the time.”

Expressing credit for Bruce’s achievements, Smith said: “I said when I took the job that I have an awful lot of respect for what he has done in management but, more importantly, for how he is as a man as well.

“This season, if you look at Newcastle at the start, there were a lot of questions about the club and where it was going. But Steve has gone in and done what he does best – got them organised.

“They’ve got pace and power up front. They are winning games – they’ve won the last couple – and they beat Manchester United at home as well. They are in a good run of form at the moment.”

Smith was particularly impressed with Newcastle’s last away performance, a 3-2 win at West Ham courtesy of a devastating display of counter-attacking which saw them romp into a 3-0 lead before conceding two late goals.

“It could have been five or six, such is the pace and power they’ve got in their team,” assessed Smith. “They were outstanding in their counter-attacking.

“They’ve got really good organisation as well. They’re tough to break down, but a real threat on the counter.”

Smith’s Villa had issues coping with Wolves’ counter-attacking threat in their last match prior to the international break, a lethargic 2-1 defeat that has left the club just above the relegation zone.

Despite injury woes going into, and during that game, Smith is hoping there will be no repeat of such a sorry display.

“Our last performance away wasn’t so good and the players certainly got a reminder of that,” said Smith.

“We had a debrief about Wolves. We picked out some things that we have to get better at, collectively, and the players know they have to do better individually.”

Smith has captain Jack Grealish fit again after a four-week lay-off with a calf injury, while goalkeeper Tom Heaton should also return after missing the Wolves defeat with his own calf problem.

Defenders Matt Targett and Bjorn Engels also come into contention after the former was taken off just after the break at Molineux with concussion, while the latter missed the game with a hip injury.