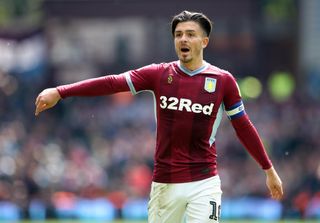 Conor Hourihane’s rocket and Tammy Abraham’s penalty turned the game around in the final 15 minutes to give Villa a narrow lead in their Sky Bet Championship play-off semi-final first leg.

Dwight Gayle opened the scoring but was sent off with two minutes left after collecting a second yellow card for diving in on Jed Steer.

🗣 Dean Smith: Comeback was deserved. Big job ahead in the second leg.#AVFCpic.twitter.com/WnJ9SXVx9a— Aston Villa (@AVFCOfficial) May 11, 2019

Grealish set up Hourihane and won the spot-kick for Abraham to win it and Smith praised his skipper.

He said: “With the quality he’s got he can create things. That’s where we want him on the ball in the final third.

“Credit to West Brom in the first half, he had to beat four or five players with the numbers they had behind.

“By keeping our width in the second half, it gave us licence to go forward and get into places.”

But Smith expects more from his side after they were forced to battle back from a goal down at Villa Park on Saturday.

He added: “I’m pleased we won the game but not pleased with the performance. We can certainly perform a lot better.

“Albion came with a game plan to sit behind the ball and slow the game down which they did very well and they capitalised on a mistake from us.

“Our movement and use of the ball we didn’t do well enough in the first half.

“We never created as many chances as we should have with the players we’ve got.

“In the second half we were better and we kept our width better. We created more opportunities but it took a really good shot from Hourihane to get us back into it.

Villa went behind when Gayle drilled in from the edge of the area in the 16th minute after Glenn Whelan’s error gave him a clear run through.

Jay Rodriguez had earlier hit the bar and Albion looked like holding on until the 75th minute when Hourihane netted from 20 yards.

Just 202 seconds later Villa were ahead when Kieran Gibbs brought down Grealish in the box and Abraham netted his 26th goal of the season from the spot.

Gayle, who was booked for time wasting, then received a second yellow card after making contact with Steer as he slid in to reach James Morrison’s cross.

“He’s got booked for allegedly time-wasting for the throw-ins. To my mind, every time the ball went out he had an intent of walking towards to the ball,” he said.

“It’s a new one on me if you have to jog and sprint to restart every time the ball goes out.

“I’ve got no problem with the referee discussing that with him and trying to hurry him up, but not once did Dwight stand still, every time he’s walking to take the throw-in.

“The second one, he’s got every right to contest the ball. It’s a fantastic delivery from James, great timing from Dwight and if he gets contact he’s a two-goal hero. He’s obviously a big player for us, that’s obviously a big frustration.

“He is a goal threat but gives you so much more, he is going to be a big blow (on Tuesday).”

Shan admitted Albion must approach the home leg on the front foot if they are going to overturn the deficit and reach Wembley.

He added: “That’s the approach we’re going to have to have. Maybe tactically we have to have a different approach.

“We sat deeper today, the game plan worked for large parts but we were undone with a shot from distance and a penalty.

“It’s simple communication, when the ball gets squared (for the first goal), to get people in the right slots. We’re frustrated with that one and the momentum swings with them.”