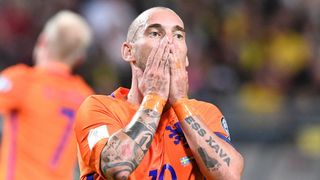 Netherlands captain Wesley Sneijder felt a refereeing decision cost his team a deserved victory after they drew 1-1 in Sweden in a World Cup qualifier on Tuesday.

Bas Dost looked to have given Netherlands all three points in Solna in Group A's curtain-raiser, only for referee Daniele Orsato to disallow the goal for a foul on defender Victor Lindelof.

Sneijder had earlier slotted in an equaliser for his side after Kevin Strootman's lax play led to a superb Marcus Berg lob, but the skipper was dissatisfied with a single point.

"I think Dost just used his body well and he plays the ball in," Sneijder told NOS.

"Then it would have been a deserved victory."

"We kept going, but luck was not on our side," Sneijder said. "Or maybe it was, but the goal of Dost was rejected.

"We also were the better team. We have to give away anything, but in the last minute before half-time there was the goal at the other end. I have to give the team compliments.

"We continued to fight and even after the equaliser we went for then win. We did not lose, but I would have liked to have more."