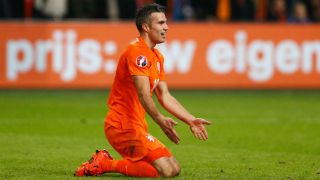 Netherlands playmaker Wesley Sneijder believes Robin van Persie still has a role to play with the national team and has urged the Fenerbahce striker to respond after being dropped.

National team coach Danny Blind opted to leave Van Persie out of his squad for the international friendlies against Wales and Germany this month, claiming the forward is not fit enough to compete at the highest level.

Sneijder feels the former Manchester United and Arsenal man still has the potential to be a key figure has advised the 32-year-old to prove Blind wrong.

"Van Persie should be part of the team if he is fully match fit," Sneijder told Algemeen Dagblad.

"But it is not up to me to determine whether someone is fit or not.

"I was in a similar situation two years ago and there are two things you can do. You can either throw in the towel or you work your arse off and prove everybody wrong. I did the latter and I hope Robin will do the same.

"You are going through hell if something like this happens. First you lose the captaincy and then everything just seems to slip through your fingers."

Van Persie is the Netherlands' all-time leading goal-scorer with 50 strikes from 101 appearances for his country.