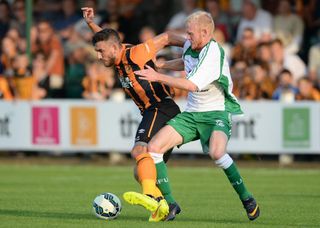 Snodgrass, who moved to the KC Stadium from Norwich City in June, dislocated his kneecap at QPR last Saturday and has been forced to undergo an operation as he starts a lengthy road to recovery.

Manager Steve Bruce revealed earlier this week that the 26-year-old is facing six months out and confirmed on Saturday that Snodgrass is most likely to return next pre-season.

"It looks as though he will be out for six months, but in my experience that practically rules you out for the season," said Bruce.

"It's six months, then probably two months of rehab.

"If I'm being honest, I doubt we'll see him until next pre-season."

The setback is a major blow in Snodgrass' career, although Bruce knows it could have been even worse for the Scotland international.

The Hull boss added: "Robert dislocated his kneecap and subsequently damaged the ligaments that hold the kneecap in place.

"Thankfully he hasn't damaged the cruciate as we first thought, but the state of the injury isn't good.

"It's devastating for him and for us. A lot was invested in him to give us something a little bit different from midfield.

"It's tough luck, but that's football."