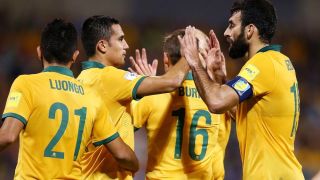 Australia will host Greece in two international friendlies in June, with the first game to be played in Sydney.

The Socceroos are expected to face England later this year and meetings with Greece were confirmed on Tuesday.

ANZ Stadium will host the first game on June 4 before the nations head to a venue yet to be confirmed three days later, although it is expected to be played in Melbourne.

Socceroos coach Ange Postecoglou welcomed the announcement as he prepares to face the country of his birth.

"We're excited to lock in the match against Greece on home soil," he said.

"There's no doubt the Greek match will be a hit with the Socceroos and Greek fans and we can look forward to a special atmosphere at ANZ Stadium.

"Playing Greece will be a good match up for us as we look to play as many teams as possible from outside our region when we have breaks from our World Cup qualifiers against Asian opposition.

"We have two very important World Cup qualifiers coming up in Adelaide and Sydney in March, which are our first focus but it is good to have this match locked in as we continue to build throughout the current World Cup cycle."