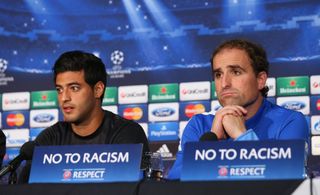 United have found it hard to get going under new manager David Moyes, currently eight points behind league leaders Arsenal in the English Premier League.

Despite United's slow start under Moyes, the Spaniards are wary of a backlash from the star-studded squad.

"Manchester United has a new manager as well and it takes time for the players to adapt," Sociedad coach Jagoba Arrasate said.

"I do not put too much faith in the fact that Manchester has a bad streak ... because they have got splendid players and they can react at any time.

"We expect the best version of them. If it is not like this, very much better, but we cannot be thinking that tomorrow's game will be easy."

United have performed better in Europe and are leading Group A after the opening two matches, with Sociedad still searching for their first points.

Sociedad striker Carlos Vela believes it is no surprise United are taking time to settle after Sir Alex Ferguson's retirement last season but does not believe they are easier to beat under Moyes.

"I wouldn't say Manchester United is weaker at all," the former Arsenal man said.

"Of course they have made a massive change with the new manager and all changes need time to settle.

"It is an important change after a long time with the same manager and players have to get used to the new style and the new project that the club wants.

"But finally they are going to finish fighting for all titles as every year."