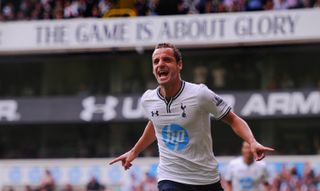 The Spaniard - who joined from Valencia in August - has already proved his worth to the club with two goals from the penalty spot in as many league games so far, sealing 1-0 victories against Crystal Palace and Swansea City.

And with the derby match looming, Soldado insists he understands the significance and is determined to continue his goal streak in the coveted fixture.

"It’s always important to score goals, especially if they are important to the team and I hope to keep on doing this for the team," he said.

"My team-mates have already told me about playing Arsenal - it’s the most beautiful derby, the one with the biggest rivalry for Tottenham, I cannot wait to play in this environment and of course I hope we can get the three points.

"The new players all understand the importance of the derby.

"There are rivalries in La Liga, just as there are here in the Premier League, but Tottenham against Arsenal is one of the most beautiful games for the club and everyone who has come in from outside will want to play in it.”

Tottenham will be banking on their new signing too, having not beaten Arsenal away from home since 2010, with the previous two encounters at the Emirates Stadium ending 5-2 in Arsene Wenger's side's favour.