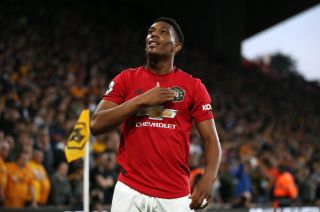 Ole Gunnar Solskjaer accepts Manchester United are lacking creativity in midfield but believes Anthony Martial’s return will improve a team who are already benefiting from the switch to a back three.

After stopping the rot with an impressive display in the draw with table-topping rivals Liverpool, the Old Trafford giants dug deep, and at times rode their luck, to end their long wait for an away win.

A first-half penalty from a fit-again Martial, making his first start since August, proved the difference at a rocking Partizan Stadium, where Solskjaer was delighted to seal a much-needed 1-0 victory after enduring 11 successive winless matches on the road.

But the triumph against Partizan Belgrade was not without frustration as the United boss bemoaned a lack of pressing before conceding the midfield currently lacks creativity.

“But now Anthony’s back, got a goal today and I’m sure you’ll see us improve as a team with Anthony in the team because he does give us something different.”

Paul Pogba’s absence is certainly not helping matters and the World Cup-winning midfielder will again be absent when United head to Norwich looking to build on Thursday’s triumph in Serbia.

“When I watched the first game against Liverpool, I saw a team with lots of courage,” Solskjaer said of the Canaries’ Premier League opener. “They were brave, they played their own way and they kept going.

“They are a team with a clear philosophy on how they want to play.

“So, I hope we’re going to stop them, because it’s always going to be difficult down at Carrow Road, but we’re ready for it now.

“We’ve been to Belgrade, got some players back.

“I managed to take Aaron (Wan-Bissaka) and Anthony off after 60 minutes because they’ve been out for a long time.

A win is a win. Safe journey home to all the fans that made the trip 🙌🏿 🕸🔴 #AWB#MUFCpic.twitter.com/4bWcJYiWeS— Aaron Wan-Bissaka (@awbissaka) October 24, 2019

“So, hopefully we’ll have a fresh team because we need to be at our best to have a chance.”

United could well again line up with a back three flanked by attack-minded full-backs on Sunday after Solskjaer surprised Partizan by persisting with the system that stifled Liverpool.

“Well, I think the injuries made us get into a position where the performances didn’t come,” the Norwegian said of the move to this system.

“Jonah (Phil Jones) and Harry (Maguire) were involved in a back three in a semi-final. You’ve got Jesse played in his position.

“Injuries have made us go into this position but it’s working quite well.”

United are working hard to improve that injury situation and the return of Martial is a welcome shot in the arm – especially as he could work well in the front two with Marcus Rashford in this system.

“That could happen, definitely,” Solskjaer said.

“I thought Marcus and Dan James caused Liverpool problems, so it depends on who’s fit.

“Mason (Greenwood) could have played today as well.

“We’re looking more dangerous up front with two at the moment.”

Solskjaer did, though, admit on the eve of the Partizan game that United lack a sharpshooter like Tottenham star Harry Kane.

Hours after that Erling Haaland, a player Solskjaer worked with at Molde, underlined his credentials, with the Red Bull Salzburg striker taking his Champions League tally to six goals in his first three appearances.

“I don’t think it’s the time now for me to talk about other strikers, other team’s strikers,” Solskjaer added.

“I spoke about Harry Kane yesterday and Erling today, I don’t think it’s right for me.”