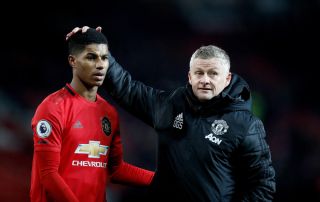 Ole Gunnar Solskjaer has defended himself against accusations he put his own interests ahead of Marcus Rashford’s following the striker’s injury setback.

Manchester United forward Rashford is facing a lengthy spell on the sidelines after suffering a stress fracture of the back in last week’s FA Cup clash against Wolves.

Former Arsenal and England forward Ian Wright said Solskjaer “thought about himself before the player” when he sent Rashford on as a substitute in the third-round replay at Old Trafford.

Wright’s comment came after reports Rashford had already been carrying an injury before the game and exacerbated it in his 16 minutes on the field.

That has been denied by United manager Solskjaer and the Norwegian insists he would never jeopardise a player’s fitness to win a game and ease pressure on himself.

Solskjaer said: “No, I never put myself before the team. I always put the team and the club before anything else.

“Marcus has had minor discomfort in his back since the Burnley game. That’s maybe two weeks before this game.

“We’ve had scans, we’ve monitored him. There’s not been any injury there. He’s had complaints, yes, and I had a discussion with him the day or two days before (and said), ‘FA Cup, I’m going to rest you’.

“He felt fine. He was very, very adamant that if needed he could at least do half an hour because we want to go through in the cup. That just shows you Marcus’ attitude.

“He had no complaints training the day before the game. He looked very free and when I asked him if it was OK to be on the bench – no problem. He wanted to come on. It’s just one of those unfortunate things.

“We have to manage players every single day, loads of things that Ian Wright or anyone doesn’t know about.”

Solskjaer has previously been coy about how long Rashford may be out but he does now seem to accept the 22-year-old could be missing for months rather than weeks.

The Norwegian said: “We know that Marcus is out for a few months. That will take its toll on the team because we are stretched.”

Solskjaer, who was holding a press conference to preview Wednesday’s home game against Burnley, was unclear when asked directly if Rashford could miss the remainder of the season, harming his chances of playing in Euro 2020.

He said: “Marcus is going to get as long as he needs to get fit. We are not going to risk him when he has had an injury. I have got the best medical staff in the country and I am sure when Marcus comes back he will be 100 per cent fit.”

Solskjaer has suggested he may look to the transfer market to cover for Rashford’s absence.

He said: “That is the million dollar question for us because Marcus has been fantastic. Someone’s got to step up.

“If we find something in the transfer market that might be one solution, but the best solution is the players stepping up and taking their chance.”

Solskjaer stressed it was important the club are not forced to overpay or accede to too many agents’ requests. This comes at a time when United’s attempts to sign Sporting Lisbon midfielder Bruno Fernandes appear to have stalled over the fee.

Solskjaer said: “Of course we don’t want to inflate the prices. That is important that we use common sense.

“There are other things too when you sign players, that you have to keep in control. You can’t give agents the control by giving buyout clauses and stuff. That has been touted around, that is for me, we have to be in control.”