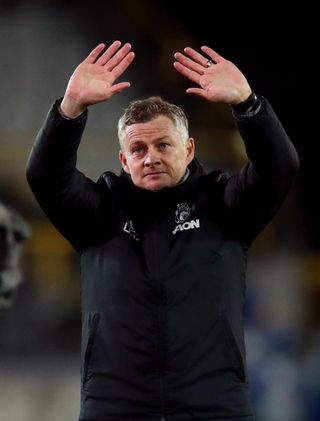 Ole Gunnar Solskjaer’s overriding feeling was relief after Manchester United drew at Club Brugge, where his side’s poor start was compounded by the challenging conditions and a questionable Europa League match ball.

With little time to recover from Monday’s Premier League win at Chelsea, the Reds crossed the Channel to take on the Belgian leaders on a wet and windy night in Bruges.

Emmanuel Dennis got Club Brugge off to a dream start after catching the normally-dependable Sergio Romero well out of position, but Anthony Martial capitalised on an error to silence the tired Jan Breydelstadion and seal a 1-1 draw.

That away goal means United have the upper hand heading back to Old Trafford for the second leg of this last-32 tie, leaving Solskjaer pleased on the whole.

“It was a difficult game against a well-organised team in difficult conditions,” he said. “I don’t think it was one of the best games that anyone’s seen.

“A bit sloppy concentration-wise, but the conditions with the pitch and the ball makes it hard.

“I think you can ask any of the players. That ball doesn’t help anyone play football.

“We needed to make everyone part of the squad (so I made changes), gave them games.

“We’ve got so many games now, so we got an away goal, we got a draw. We go home next week so hopefully we can finish the job.”

Solskjaer will be hoping for better football from his side next Thursday – and in an ideal world a better ball.

Japanese manufacturer Molten provides the match balls in the Europa League and the United boss was not overly pleased with it on Thursday.

“It’s just different and difficult to play with,” Solskjaer said. “You can get one and try!

“But it’s the same for the two teams, of course. But the conditions weren’t nice, the wind and the rain.

“But anyway, strange goals for both teams. Their throw-in we scored from and a long kick straight through the middle, so lack of concentration probably from both teams there.”

Another game, another goal for @AnthonyMartial 🌟— Manchester United (@ManUtd) February 20, 2020

“It was a good goal today,” Solskjaer said. “He wasn’t really in the game before he scored the goal.

“We didn’t create enough, or we didn’t make enough runs in behind to create space for Anthony and it was a frustrating night for him until then.

“Then (a) good goal and then he gets a good chance with his left foot, good strike, good save by Mignolet.”

That second chance hit the post but United should have been fighting an uphill battle from the outset in the view of Club Brugge head coach Philippe Clement.

Before beating Romero with a clipped effort, the video assistant referee reviewed a third-minute challenge by the Argentina international on Dennis in the box.

“For me it’s a clear penalty,” Clement said. “If I see the images and in some countries it’s a red card, if you go with two feet forward against the leg of somebody, it’s a red card.

“All the circumstances need to go your way if you’re going to beat United and tonight we didn’t get that.”