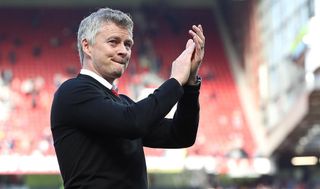 Ole Gunnar Solskjaer is prioritising signing players with a reputation for working hard as he looks to “set the culture right” at Manchester United this summer.

United look set for upheaval after an underwhelming sixth-place Premier League finish, in which they were a whopping 32 points behind champions Manchester City.

Solskjaer, as has been the case in recent weeks, did not name any individuals on his hit list but identified some of the character traits he would prefer in anyone who will move to Old Trafford over the next few months.

Solskjaer told United’s official app: “We’ve tried to educate our players and our kids to be proper people. In my view, the best players have always been the best people.

“You have to have that value system and a certain kind of attitude about you to make a Man United player.

“You have got to have the qualities and our fans want to see exciting players. Of course we want to get up from our seats. We want to see defenders who defend like they’re doing it for their lives – that’s the most important thing.

“When we start games (against big clubs), our fans clap a striker making a tackle. It’s always been in our culture. You have to have that work ethic and we’re scouting the market, trying to find the right ones.”

Ole talks about rebuilding his team and what he’s looking for in the transfer window. 👇 #MUFC— Manchester United (@ManUtd) May 16, 2019

Solskjaer returned to the club as interim manager in December following the sacking of Jose Mourinho and his effervescent presence seemed to lift a cloud hanging over the club.

He won 14 of his first 17 matches in charge although, shortly after his appointment as permanent manager, familiar failings surfaced as a number of players under-performed in the closing weeks of the campaign.

Solskjaer wants to draw a swift line under what has gone and is already looking forward to pre-season, with United scheduled to tour Australia and Asia.

He added: “I can’t wait because it’s a fresh start. We set targets, aligning our ambitions and we’ll work together and agree certain principles.

Next season we need to get back to how @ManUtd play, for me that's most important. We need to find that willingness and respond the right way ✊🏾 pic.twitter.com/ygs9lLIh5D— Marcus Rashford (@MarcusRashford) May 15, 2019

“It’s always a massive month, or six weeks, that we have together to agree on how we’re going to do things to set the culture right.

“We want to get everyone fit for when the season starts. We don’t want to lose anyone with injuries.

“But there are a certain set of principles to say ‘this is the way we want to play’ and we can agree on, and find a system we feel comfortable in and just go from there.”