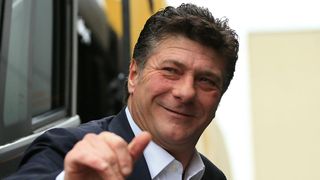 Watford manager Walter Mazzarri claims Bournemouth are playing some of the "best football in the UK" and called for an improvement from his side ahead of Saturday's match.

The struggling Hornets have lost five consecutive Premier League away games, slipping to 14th in the table, but Mazzarri has defended his side's displays in their recent defeats.

The Italian insisted hard work will help Watford to achieve their goal of staying in the top flight, with returning players key to their survival chances, but he is expecting a tough test against Eddie Howe's men.

"It is true in the last few away games, we did have some negative results, but I am happy with the overall performance, especially against teams like West Brom, Sunderland and Stoke," Mazzarri told reporters at his pre-match press conference.

"It is very important to understand that if we work like that then the positive results will come. This year the objective is to remain in the Premier League and do it in the best possible way.

"We did extremely well at the beginning and now we've had some down performances. The important thing is to recover the good feeling and get back the important injured players.

"It is important we let the negative moments pass. This is a club that values the work that is done, aside from the results of the moment. We have been working very hard and very well for the future of this club.

"In my opinion, [Bournemouth] play some of the best football in the UK. They have a lot of experience and they are growing. We will play at their stadium this time and I am very curious to see how we will perform against one of the teams that plays the best football."

The availability of goalkeeper Heurelho Gomes is in doubt after he suffered a back injury in the 0-0 draw at home to Middlesbrough last time out, with Isaac Success, Daryl Janmaat and Nordin Amrabat unlikely to play.

"[Gomes] trained today but tomorrow is the decisive day, not only for him but other players," said Mazzarri.

"Tomorrow it will be crucial to decide who is travelling. Only Janmaat will be evaluated tomorrow. The other two [Success and Amrabat] for sure won't be available."

Mazzarri declined to comment on rumours linking Watford with a move for Arsenal defender Carl Jenkinson and played down speculation about Odion Ighalo's future, revealing the striker will travel with the squad to Bournemouth amid reports West Brom are trying to sign him.