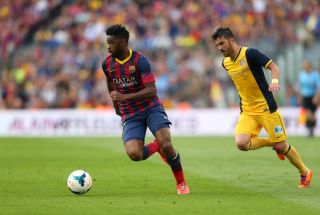 The midfielder was introduced to the Upton Park crowd ahead of the London club's meeting with Southampton on Saturday.

Song returns to the English top flight having represented West Ham's cross-city rivals Arsenal between 2006 and 2012, and the chance to make a comeback to British shores was key to his decision.

He told the club's official website: "I'm very happy to be here and very happy to see the guys and the fans today and to start to do my job for West Ham United.

"I think this is very important for me to be coming back to London to West Ham United, which is a club with ambition to build a new stadium and become a big club. I am very excited to be part of this project.

"It was a very hard decision, because when you have options of a lot of clubs who are playing in the Champions League, but at the end of the day I chose West Ham because I wanted to come to the Premier League.

"When I spoke to the manager, he gave me very good advice. I had a very good chat with him and that's why I am coming here.

"I think the club has very good ambition and I hope we can maybe catch the European positions, because that would be very good for the club.

"I need some games to be ready and get my fitness back. When I am 100 per cent, I will bring the experience and I will make the fans happy, I am sure.

"I am lucky to be back in London, back in England and with West Ham. I am looking forward to showing everyone what I can do."

The Cameroon international has been a peripheral figure at Camp Nou and made just 19 La Liga appearances last season.

But the switch to Sam Allaryce's side is likely to offer him increased first-team opportunities as the club seek to build on last term's 13th-place finish.