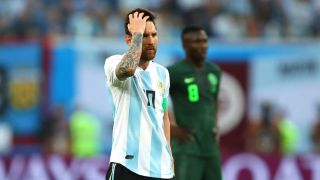 There probably won't be another match at the 2018 World Cup which pits two squads as talented as Argentina and France against each other. On paper, it's a tie befitting a final.

But, bar a few moments of Lionel Messi genius, there has been little to suggest from either team so far in Russia that the very first knockout contest of the tournament will produce a standard of football that lives up to such expectations.

It's been a strange campaign for both France and Argentina until now.

Although Didier Deschamps' men ultimately had little difficulty getting through Group C, their performances against fairly modest opposition in Australia, Peru and Denmark were nothing short of turgid.

While many would expect a squad boasting the talents of Antoine Griezmann, Paul Pogba, Kylian Mbappe, Ousmane Dembele and Nabil Fekir to light up the group stage, France's journey into the last 16 was a more of a frustrating crawl through rush hour than a hair-raising blast on the motorway.

Deschamps would undoubtedly insist reaching their destination in one piece is all that matters, but France's tournament has been blighted by key players underperforming and suggestions the team has no soul, charm or discernible philosophy.

Argentina find themselves in a similar position, though quite how they managed to escape an embarrassing group-stage exit remains a mystery – Marcos Rojo's late goal cruelly denying a spirited Nigeria side from a date with France.

But while France have just had to endure a few joy-sapping displays, the South Americans have contended with claims of mutiny, some baffling selection choices and the judgements of a sweary 'God' watching down from his lofty perch – or Diego Maradona, as he is known to most of us.

Jorge Sampaoli's stock has taken quite spectacular tumble over the last two weeks, with one of the biggest claims to appear in the media being his players wanting him replaced – during the group stage – by general manager Jorge Burruchaga.

Arguably the strangest of Sampaoli's selections saw him pick 32-year-old Enzo Perez for the last two group games, despite the River Plate man not even initially featuring in the 23-man squad. He was a late replacement for the injured Manuel Lanzini.

Midfield has also been an issue for France. Deschamps seems clueless as to his best set-up, with Corentin Tolisso, Blaise Matuidi and Paul Pogba all failing at different times to convince alongside the consistently impressive N'Golo Kante.

Ever Banega's Sevilla team-mate Steven N'Zonzi has arguably looked the most assured next to Kante, featuring against Denmark and offering far greater control and presence than Pogba had previously.

And then there's the Griezmann issue.

A few flashes against Peru aside, the Atletico Madrid star has been downright ordinary at these finals – Fekir looking much sharper in his Denmark cameo than Griezmann has at any stage so far.

On performances alone so far, a place in the quarter-finals flatters both teams.

But, if ever there was a time for Messi, Griezmann and company to destroy the shackles of expectation and stride forward in imperious fashion, now is as good as any.