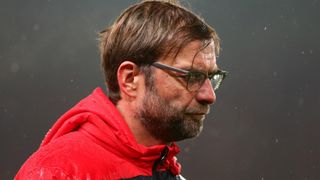 The number of Liverpool players suffering hamstring injuries is not a coincidence, according to their former manager Graham Souness.

Philippe Coutinho and Dejan Lovren went off with hamstring complaints before half-time in Liverpool's 1-0 win over Stoke City in their League Cup semi-final first leg, before Kolo Toure suffered the same fate late in the game.

Liverpool have a score of players on the injury-list including captain Jordan Henderson, Daniel Sturridge and Martin Skrtel, with the likes of Danny Ings and Joe Gomez ruled out for the season.

Souness has questioned Klopp's training methods, believing his 'high-press' style tactics may be the reason so many players are on the sidelines.

"After 11 games, the guys who've been playing are match-fit," the 62-year-old said on Sky Sports.

"Some people can get there in three or four games, some need eight or nine, but after 11 games, if you've been playing regularly, you're match-fit.

"A new manager comes in and all the chat was about high press further up the field. It's hard work to do that for 90 minutes. You can do it in bursts.

"I just think they've fallen foul of that. It's not a coincidence, five hamstrings. To have them all at one time, I think they have to look at what they're doing in training."

Ings and Gomez are out with ACL injuries, but Souness believes hamstring issues can be just as harmful.

"It's the one that the players fear. The No 1 is the ACL - the anterior cruciate ligament - closely followed by a real tear of the hamstring, because you know that's the one injury that kids you," he added.

"You can train, you can get treatment, you can go out on the training ground and think you're okay and then the minute you get into the real action it goes again.

"They go everywhere from a 10-dayer to a six-weeker and some of those will be six-weekers."