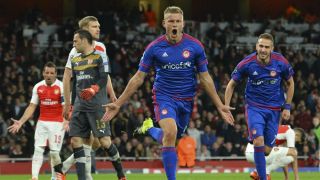 The Montreal Impact appear to have hit a wall in their attempt to sign Icelandic international striker Alfreð Finnbogason.

A Spanish source told Goal Canada this week that the Impact’s director of international relations Nick De Santis has been in Spain trying to acquire Finnbogason, whose contract is owned by Real Sociedad but is on loan with Olympiakos. After failing to impress following a big-money move in the summer of 2014 from Heerenveen in the Dutch Eredivisie, Real Sociedad was open to transfering Finnbogason to the Impact; however, the 26-year-old, who is expected to represent Iceland at this summer’s Euro in France, has turned down offers from the Quebec club, having no desire to move to Montreal.

Impact club president Joey Saputo said on Monday that the club is actively working on finding a player who could replace Didier Drogba in Montreal’s attack. The Ivorian striker will be joining the Impact next month for the last phase of its preseason training camp, but Saputo didn’t rule out the possibility of Drogba potentially leaving in the summer.