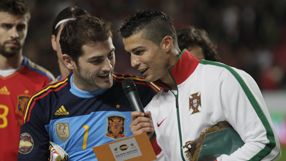 "The 10 countries are agreed to give the vote to Spain," Deluca told Reuters after a Conmebol executive meeting at its headquarters in the Paraguayan capital.

Deluca, who did not elaborate, said the meeting had not discussed support for bids for the 2022 finals which will also be voted on at FIFA headquarters in Zurich next week.

The joint Spanish and Portuguese bid will be competing against three others: England, Russia and Netherlands-Belgium.

Australia, the United States, Qatar, Japan and South Korea are vying to stage the 2022 finals.

"Spain for South Americans is like the mother country, and on top of that we have a more than friendly relationship with the Royal Spanish (Football) Federation which is really one more of us," Deluca said.

"We feel in Spain like in our own home," he told reporters later.

When Spain, newly crowned as world champions in South Africa in July, played a friendly against Argentina in Buenos Aires in August there was speculation locally about the visit having a political aspect with the 2018 World Cup in mind.

Brazil will be staging the next finals in 2014.