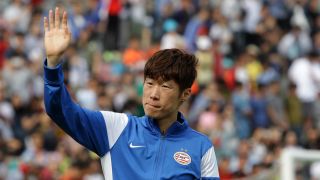 South Korea legend Park Ji-sung believes low expectations could help his country in a group that has been blown wide open by Mexico's shock win over Germany.

Hirving Lozano scored the only goal of the game as Mexico edged past the reigning champions in Moscow on Sunday, cranking up the pressure ahead of South Korea's clash with Sweden on Monday.

Most expected Germany to win Group F at a canter with the other three sides left to battle it out for second place.

Mexico's stunning win, however, has turned the group on its head and despite an underwhelming qualification campaign, Park is confident that South Korea can progress to the knock-out stages.

"This result was not what we expected, so it changes the group," he told The National after Mexico's eye-catching win. "But we have to focus on our first match and then see what happens for the rest of the group.

"We always aim to pass the group stage; that's our first goal for this World Cup. And we had a bad performance at the last World Cup, so we want to turn it around from then.

“The players are aware of the performance expected of us at the .”Korea Republic’s is ready for June 17, 2018

"This World Cup our expectations are quite low because of the national team's performance during qualification.

"I believe [they can advance]. They prepared well and hopefully they can make it. But this group is very, very tough, and then, again, the first result is not what we expected. So just do our best and see if we can get it."