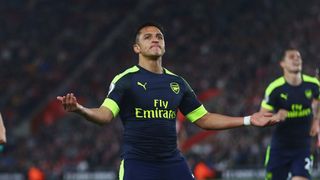 Alexis Sanchez reached 20 league goals in a season for the first time as he inspired Arsenal's 2-0 win at Southampton that narrows the gap to the Premier League's top four.

A home win over Jose Mourinho's depleted Manchester United on Sunday meant Arsenal could cut the gap to fourth-placed Manchester City to three points with victory at St Mary's Stadium, but they never looked likely in a second-rate first half.

Sanchez and Mesut Ozil had been guilty for letting the air out of numerous attacks for Arsene Wenger's side, but the duo combined sublimely to puncture the Saints' back line on the hour.

Making his 100th Premier League appearance, Sanchez celebrated his fine strike by tapping the badge on his chest in front of the travelling fans as his, and Ozil's, futures remain shrouded in doubt as their contracts wind down.

Sanchez was again involved as Olivier Giroud emerged from the bench to make the points safe and take Arsenal fifth in the table.

Arsenal face games against Stoke City, relegated Sunderland and Everton in their bid to sneak Champions League qualification for the 20th season in succession, and interventions as divine as Sanchez's in this game will be crucial.

There had been little sign of Arsenal trying to chase down the top four as the game began in soporific manner, devoid of any intensity at either end, and it was Saints who had the best chances when a contest finally broke out around the half-hour mark.

Shkodran Mustafi's tackle on Dusan Tadic presented Manolo Gabbiadini with a one-on-one chance, but Petr Cech narrowed the angles well and the Gunners' slackness was surmised when Danny Welbeck's excellent flick found Ozil but the German rejected a physical battle with Jack Stephens and the chance dissipated.

Hector Bellerin was summoned from the bench after Alex Oxlade-Chamberlain limped off, but Arsenal remained half-paced and Gabbiadini curled a free-kick wide before Nathan Redmond's arrowing 30-yarder was clawed out of the top corner by Cech.

Sanchez was anonymous in the first half and was guilty of passing straight to Saints players to kill two chances shortly after the interval, but the Chilean's next involvement was breathtaking.

14 - Alexis Sanchez now has 14 away Premier League goals this season, more than any other player. Acclimatized.May 10, 2017

Ozil too came to the party with an incisive first-time pass to dissect the Saints backline and find Sanchez, who sat Maya Yoshida and Stephens down with a juddering turn before beating the onrushing Fraser Forster.

Forster was sharp to keep out Granit Xhaka's deflected thunderclap of a shot and the goal clearly sent jolts of confidence through the visitors as they controlled possession and stifled Saints' attacking chances.

And the late-season hunt of the top four was set in motion when Sanchez picked out Ramsey and his cross was nodded home by an unmarked Giroud.