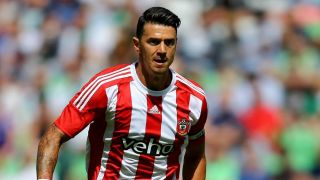 Southampton captain Jose Fonte is thrilled at the prospect of beginning the club's UEFA Europa League adventure in the third qualifying round at home to Vitesse on Thursday.

Fonte and his team-mates secured their place in this year's competition thanks to a seventh-placed Premier League finish in 2014-15.

Under Ronald Koeman - who managed Vitesse in the 2000-01 campaign - Southampton gained plaudits for their style of football, claiming a spot in Europe for the first time in 12 years.

In 2003-04, Gordon Strachan's side were ousted in the first round of what was then the UEFA Cup by Steaua Bucharest, but Fonte believes last week's 3-0 friendly win over Feyenoord is a positive sign.

"It will be like a dream, so I'm looking forward to it, obviously," he told the Southern Daily Echo.

"Feyenoord is a bigger club, and we still showed that we were levels above them, so we're going to approach this game like any other - full detail and attention, and we will do our best to win.

"It's a long, long competition. First, we need to make sure we're in the group stages and then we go step by step, but, for now, we need to focus on Vitesse, because that's the next challenge."

One Southampton player who does have experience of this competition is Jordy Clasie, a close-season arrival from Feyenoord.

"It's important for us, for every player, to play in the Europa League," he said. "I played last season with Feyenoord and it's amazing to play in.

Southampton come into Thursday's first leg at St Mary's Stadium in fine form, having scored 16 goals without reply in friendlies against Groningen, Quick '20 and Feyenoord.

Vitesse, meanwhile, have enjoyed pre-season victories over Dundee United, Rizespor and Asteras Tripolis, and were the highest-ranked unseeded team in the draw for this penultimate round before the group stages.

Peter Bosz's men finished fifth at the end of the regular 2014-15 Eredivisie campaign, earning their place in the Europa League thanks to wins over PEC Zwolle and then Heerenveen in their domestic play-offs.