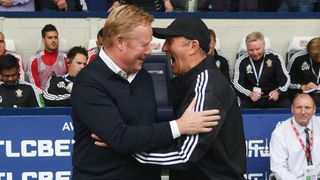 Two clubs still running the risk of being drawn into the Premier League's relegation battle will look to take a decisive step in the right direction when West Brom visit Southampton on Saturday.

The inconsistent Saints have won only two of their last 11 matches in all competitions, although they showed what they are capable of when at their best by thrashing title contenders Arsenal 4-0 last month.

And Southampton saw off Watford 2-0 at home on Wednesday, goals from Shane Long and Dusan Tadic helping to ease some of the pressure on manager Ronald Koeman.

West Brom have made progress in their own attempts to climb away from trouble in recent weeks, winning successive league games at The Hawthorns against Newcastle United and Stoke City before holding Chelsea to a 2-2 draw away from home last time out.

That sequence sees them head to St Mary's Stadium in 13th place, level on 27 points with their hosts, who are 12th courtesy of their superior goal difference.

Mid-table obscurity is not what either club or their supporters would have targeted going into the season, but the security of a nine-point buffer between themselves and the bottom three will be more than welcome after an indifferent first half of the 2015-16 campaign.

Recent history suggests it may not be a high-scoring affair on the south coast. The last five Premier League meetings between these two clubs have produced three 1-0 wins, two for the Saints and one for the Baggies, along with two 0-0 draws.

And Southampton's attempts to keep what would be a fifth clean sheet in six meetings with West Brom will be boosted by the presence of fit-again goalkeeper Fraser Forster.

The England international denied Watford in midweek during his first appearance since March, the former Celtic man having recovered from the serious knee injury he suffered against Burnley last season.

"It's been tough, anyone who has had a long-term injury will tell you how tough it is at times," he told the club's website.

"But the comeback has gone quite quickly and I feel I've come back physically better than I was before.

"I feel really good. Now it'll just be a case of coming in and doing all the preparation I can for Saturday."

Saints will have Victor Wanyama available again after the midfielder served a two-match suspension, but Jay Rodriguez (foot) and Florin Gardos (knee) are both still out.

West Brom have close to a clean bill of health, although James Morrison could be in doubt after he limped off early in the draw at Chelsea.

Craig Gardner and James McClean were on target as Tony Pulis' team twice came from behind to earn a point at Stamford Bridge, while Claudio Yacob narrowly avoided receiving a second yellow card for a foul on Oscar, leaving the Argentine available to take on Southampton.