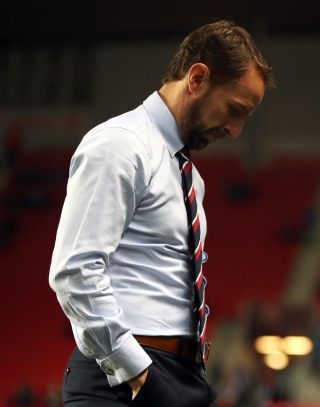 Gareth Southgate says England got what they deserved after the Czech Republic inflicted their first qualifying defeat in a decade.

The Three Lions blew the chance to seal Euro 2020 qualification with three matches to spare as the Czechs capitalised on the visitors’ listless performance in Prague.

Harry Kane’s fifth-minute penalty was as good as it got for England, with Jakub Brabec quickly levelling and substitute Zdenek Ondrasek netting a dream debut goal late on as the Czech Republic secured a memorable 2-1 comeback win.

Southgate had no arguments about the outcome as his side’s ponderous performance led to a 43-match unbeaten run in European and World Cup qualifying matches coming to an end, 10 years and a day since losing 1-0 in Ukraine.

“Clearly that’s not a night that we wanted to be a part of in terms of that record,” Southgate said.

“We didn’t play well enough, simple as that. We conceded possession of the ball too cheaply.

“Particularly in the first half we didn’t create enough chances. Second half we had some good chances that we didn’t take and throughout the night we were too open out of possession.

“Some of that was because of giving the ball away. So we gave the Czechs, who played well, got to give them credit, we gave them too many opportunities to score.”

Few could have foreseen this outcome given the way England carved the Czechs open to win March’s Group A opener 5-0.

But, much like last month’s 5-3 win against Kosovo, Southgate’s side looked shaky at the back – and this time they lacked the attacking spark to get them through.

“I think whatever the balance, we didn’t use the ball well enough,” said the England boss, whose side face Bulgaria in Sofia on Monday.

“And in terms of a wake-up call, I think we’ve had a lot of plaudits. I think we’ve always maintained that there’s a lot of work to be done to be a really top team.

“I think tonight was clear evidence of that. We have to respond in the right way. We have a couple of days to regroup, not long, and we have to reward our supporters with a better performance than we gave tonight.

Asked how much blame he accepts having selected some out-of-form players in an ineffective 4-2-3-1 formation, Southgate said: “Yeah, look, I always have to accept responsibility.

“We tried something to make ourselves a bit more solid without the ball, and that didn’t happen.

“We didn’t look any more solid, and we were poor at using the ball in the first half.

“That said, at 1-1, at half-time, we were able to change that. I think we were better in the second half and we created chances to win the game.

“In terms of the players, I think there are players who aren’t playing well for their clubs, but that’s the situation we’re in at the moment, certainly in a couple of positions. So, yeah, we collectively have to accept the result, but of course, as the manager, then I’ve got to accept that as well, absolutely.”

Czech counterpart Jaroslav Silhavy spoke in the pre-match press conference about targeting England’s imperfections, yet could hardly believe how much joy they experienced on Friday night.

“I’m obviously over the moon but I have to thank my players, first and foremost, because they played great,” he said.

“It was a 100 per cent performance and that is the only way to succeed really, so we are very happy and I think time will show that we made history tonight because we defeated England after so many years and at a time when they are playing really well.

“The performance was really great, we were active and made England sweat even though they are a very strong team.”