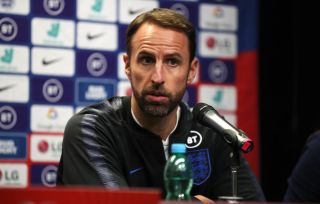 England’s awful performance shocked Gareth Southgate as much as a first qualifying loss in a decade and the manager expects a response in Bulgaria.

But England floundered as Harry Kane’s fifth-minute penalty proved a false dawn, with Jakub Brabec swiftly levelling and debutant Zdenek Ondrasek sealing a memorable 2-1 victory for a Czech side smashed 5-0 at Wembley in March.

The Three Lions were dreadful in defence, ponderous in midfield and toothless in attack, leaving Southgate calling for a response in Monday’s trip to Bulgaria.

“A lot of credit to them for the way they played, but that didn’t surprise us. We knew, coming to Prague, they would be highly motivated, they have some good players.

“And nothing in the preparation for the game suggested that we would get the performance we did.

“So, the players are human beings, some nights it doesn’t happen, and tonight was one of those nights.

“We have to find the solution, we have to accept we weren’t good enough and we have to move forward but congratulate the Czechs on their performance.

“I mean this is football, all of the players, throughout their careers and for us as the coaching staff, football is all about responding to setbacks.

“We haven’t had too many, so it feels even more unpleasant because it’s a while since we’ve felt this way.

“None of us like it, none of us will enjoy it, but that’s the reality and to sail through a qualifying group with no issue is very unusual so we have to respond, simple as that, and I’m expecting us to do that.”

A difficult night in Prague, but still in good shape. Let's bounce back against Bulgaria on Monday 👊 pic.twitter.com/5bzSLBlVmD— England (@England) October 11, 2019

England last lost a Euro or World Cup qualification match against Ukraine in October 2009 – a 43-match unbeaten run that few saw coming to an end at Slavia Prague’s Sinobo Stadium.

But, much like last month’s high-scoring win against Kosovo, the backline provided an unsteady base on a night to forget across the board.

“It’s clear we’ve got to improve without the ball, over a period of time,” Southgate said.

“That hasn’t surprised us, it’s something we’ve spoken about all week, and we didn’t get the reaction that we needed today but it’s not a time for me to look at individuals.

“I’ve got to make sure that we get the team back on track for Monday and pick the right team.

“We obviously lose Danny Rose after tonight as well.

“We’ve got to get a response and it’s going to be an interesting couple of days for all of us because we haven’t had a result like that, we haven’t had a performance like that, and we’ll learn a lot more about ourselves over the next 48-72 hours, and we have to respond in the right way.”

Rose is unavailable the trip to Bulgaria after picking up an early booking, while Callum Wilson missed Friday’s match through illness.

The Bournemouth striker will be assessed ahead of travelling to Sofia on Sunday, when the squad could be down to 21 players given Fabian Delph and James Maddison withdrew earlier in the meet up.

“We obviously have to assess a couple of the players,” Southgate, who replaced the injured Tom Heaton with Dean Henderson last week, added.

“It wouldn’t be a beneficial training pattern for them ahead of that so we should have the bodies here.”