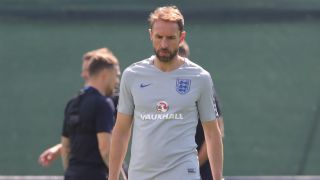 England manager Gareth Southgate believes it would have been wrong to hold a homecoming parade for the beaten World Cup semi-finalists.

The possibility of a public celebration in the team's honour had been raised in response to their unexpected run to the final four, the nation's best performance in 28 years.

But the mood was dampened by the heartbreaking extra-time loss to Croatia in midweek, with England now likely to make a low-key return following Saturday's third-place play-off against Belgium.

Southgate backed the move to keep the achievement in perspective.

"The reality is it's not actually my decision, but I agree with the decision," he told reporters. "I think if we make the final maybe it's different.

"I must say the support we've had from home and the feeling of support is immense. To have been able to make a difference is something that will live with us all forever.

"We can tell the way the country has united behind football and that's maybe more important than the football in some respects.

"But if we had a parade that would have been one part of the country and we represent the whole country as well.

"The feeling we have is we're proud and we hope, come our matches in September, that warm feeling about international football will be there again."

Last training session of this World Cup. Time for one final push tomorrow and finish on a high! July 13, 2018

Experienced midfielder Fabian Delph, who briefly returned home during the tournament for the birth of his third child, echoed his coach's sentiment.

"In terms of coming back to 300,000 fans, that would be nice. But it's not going to happen," the Manchester City man said.

"Hopefully... in the next tournaments we can [go] one step further and it will feel a lot better."