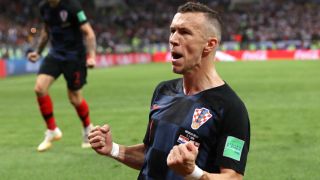 Perisic scored the equaliser in a man-of-the-match performance as Croatia went on to edge England 2-1 after extra time for a spot in Sunday's decider against France.

"Perisic is the only player who can be compared to Ronaldo from a physical point of view," Spalletti said.

"He's quick, strong and he can score more goals, even with his head. They've gained more exposure at the World Cup and they'll make themselves available to Inter. They feel good here and want to do well here."

Inter and Croatia midfielder Marcelo Brozovic has also played a key role for Zlatko Dalic's side in Russia.

Brozovic's place in midfield has freed up captain Luka Modric and star team-mate Ivan Rakitic in wins over Russia and England at the showpiece tournament.

Spalletti added: "I'll support Croatia in the final, without a doubt.

"Brozovic dictated the performance of his team against England. To let him play in the middle, they even moved someone like Modric. That says a lot about his value.

"With him, the ball is always alive. He makes the ball play and has so much quality."