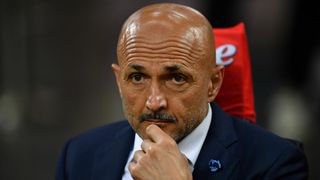 Luciano Spalletti claims he expected Inter may encounter a difficult start to the season, but he is confident they will come through it.

The Nerazzurri have taken just one point from their opening two Serie A matches, losing to Sassuolo and throwing away a two-goal lead to draw with Torino.

But Inter invested in a number of stars and had several other players involved at the business end of the World Cup, leading to Spalletti to foresee this rough patch.

"We could have expected these difficulties a little," he told a news conference. "We have several new players in the team, others are back after the World Cup. These are factors that we knew could weigh in.

"However, giving players the right instructions will soon bring benefits and we will be able to reach our potential."

Inter could at least be able to call on Radja Nainggolan against Bologna, although Spalletti is not willing to excuse the team's last two performances solely based on the absence of the new man.

"When you are a strong team, you cannot depend on one player," the coach added. "Radja has the qualities we lacked in the past season - his aggression and speed of ideas - he develops the action and can give us something more.

"But this team must be strong even if one player or another is missing."

| : "When it really mattered, we showed that we can respond to adversity. We're working to avoid going though these highs and lows. That will become key for our objectives." August 31, 2018

Inter's task will not become any easier when the Champions League starts, drawn into a group with Barcelona, Tottenham and PSV, but Spalletti is just happy to be back in the competition.

"It seems to me that we have paid every last penny of the bill to be in the fourth pot," he said.

"It is clear, however, that if we take a few steps back, we can say that last year we would have been very happy to be part of this group, entering the Champions League against Barcelona and Tottenham.

"What is most important is that Inter are back where we are now. We will grow, playing against Barcelona, Tottenham and PSV.

"It's a tough group, with very difficult teams, but there may be the small advantage that there is no team that loses points to everyone, as happens in other groups."