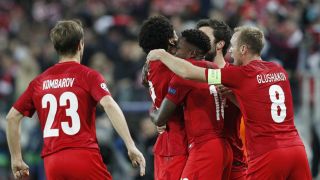 Sevilla appeared to have fully clicked into gear early in the second period, but goals from Lorenzo Melgarejo, Denis Glushakov, Luiz Adriano and Quincy Promes saw the Spaniards blown away by a Spartak side who looked irresistible on the break and moved level on five points with Liverpool.

Proceedings were thrilling and breathless for much of the first half, with Promes breaking the deadlock when finishing off a flowing Spartak move.

But their lead did not last long, as Sevilla – who gradually improved after a poor start – deservedly levelled through centre-back Simon Kjaer after half an hour and finished the first period well on top.

Wissam Ben Yedder was guilty of missing a glorious opportunity early in the second half as Sevilla's dominance continued, and Spartak capitalised through first-half substitute Melgarejo just before the hour mark.

That forced Sevilla's hand and their willingness to chuck men forward left gaping holes at the back and Spartak picked them apart, with Glushakov and then Luiz Adriano effectively wrapping things up.

And Promes' second right at the end rounded off a memorable day for the home side.

Sevilla's plan during the early exchanges appeared to revolve around keeping the ball and frustrating their hosts, but Spartak had other things in mind and deservedly went ahead after 18 minutes.

Ivelin Popov played the ball out to the right flank and Andrey Eshchenko supplied a sublime cross between the Sevilla defence and Sergio Rico, with Promes pouncing to nod in.

Their lead should have been wiped out shortly after, though.

Nolito cleverly flicked the ball through Eshchenko's legs and ran along the byline towards goal, eventually playing a low pass into the danger zone that Wissam Ben Yedder failed to connect with.

But the equaliser did arrive in the 30th minute.

Spartak failed to clear an Ever Banega corner and Kjaer slammed a left-footed volley into the bottom-right corner from close range.

And Sevilla would have taken the lead just before the break were it not for a wonderful Alexander Selikhov save, as he pushed Michael Krohn-Dehli's top-right corner bound effort on to the roof of the goal.

The frenetic nature of the match remained upon the restart, with three chances coming in the first five minutes.

Melgarejo first tested Rico with a header, before Selikhov denied Ben Yedder with a theatrical stop and pushed away Krohn-Dehli's 20-yard effort.

Spartak had an even luckier escape in the 55th minute, as Ben Yedder pounced on a loose ball after Krohn-Dehli and Selikhov collided with each other, but the Frenchman blasted the ball at Dmitri Kombarov on the goal line.

Melgarejo found the bottom-left corner with a fine curling finish from the edge of the box, before Glushakov followed suit with a controlled volley that Rico probably should have kept out.

Luiz Adriano effectively put things beyond Sevilla 16 minutes from the end, racing through on goal and confidently finishing after striding past Rico.

And Promes left Sevilla battered and bruised at the end, as he skipped past two challenges and found the bottom-right corner to round off a humiliating defeat for the visitors.