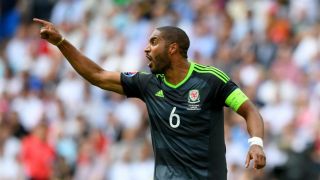 Ashley Williams hopes Wales' Euro 2016 exploits would be a source of pride to Gary Speed, their late ex-manager who the captain concedes is never far from their thoughts.

He went on to manage the side as the generation of Gareth Bale, Aaron Ramsey and company began their long journey towards making an impact at the top level in line with their sensational run to the semi-finals in France.

Tragically, Speed committed suicide in November 2011 and, ahead of Wednesday's semi-final showdown against Cristiano Ronaldo and Portugal in Lyon, Swansea City centre-back Williams conceded memories of their time together still flood back.

"I was thinking about him on the plane coming over," he told a pre-match news conference.

"I hope he'd be proud of us. He saw us grow up, and you see what we've achieved today.

"He's always in the back of our minds. When we achieve something, we think about him."

Chris Coleman succeeded Speed in the national team job and he stated Wales' journey against the odds into the final four has no bearing on how often he recalls an old friend.

"People talk about his legacy as a manager, but it's hard to have a legacy in 10 games," he said. "Speedo's legacy is 85 caps for Wales, and maybe over 50 as a captain, plus his 10 or 11 games as a manager, in which he showed great promise as a young manager.

"And then what happened, happened, unfortunately. He's not just a Welsh but a sporting icon. But I don't need a game of football for me to remember Speeds.

"I think about him every day, not just because I'm at a tournament. I don't need Wales football to remind me of my friend. He could be sitting here where I am, enjoying what we're enjoying. Unfortunately that was taken away."

Williams is likely to find himself head-to-head with Real Madrid superstar Ronaldo at various points in a keenly anticipated match, but the 31-year-old also paid tribute to Portugal's collective threat.

"He's one of the greatest players in the world, but they have other weapons in their team," he said.

"We are not obsessing over that. We'll try and nullify them as a team, as we have all tournament."