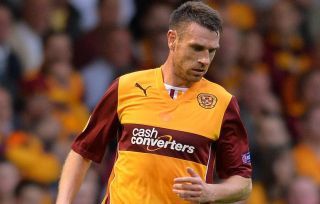 Stephen McManus headed home the deciding goal before half-time to send Stuart McCall's side six points clear of fourth-placed Dundee United, who could only draw 1-1 at Inverness Caledonian Thistle due to a superb performance from home goalkeeper Dean Brill.

Motherwell only require one point from their final two outings to secure European football.

Champions Celtic ran out 5-2 winners against second-placed Aberdeen, who are now just a point above Motherwell.

Celtic have long since secured a third successive title, but required victory on Saturday to maintain their chances of breaking the 100-point barrier.

County are just a point above Kilmarnock, who visit Hearts on Sunday and currently occupy the relegation play-off place.

Hibernian and Partick Thistle each moved a point above Ross County following an entertaining 1-1 draw.