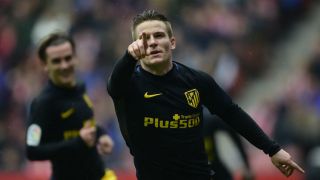 A devastating hat-trick from Kevin Gameiro gave Atletico Madrid a 4-1 victory away to Sporting Gijon on Saturday that keeps their top-four hopes firmly in their hands.

The striker came off the bench to score three times in five minutes in the closing stages to secure maximum points for Diego Simeone's side and inflict a damaging defeat on the struggling hosts at El Molinon.

Diego Simeone had warned before the match that Sporting's committed approach under Rubi could pose some problems, and the hosts certainly enjoyed the better of a scrappy first half, with loan signing Lacina Traore missing the best of the initial chances.

Yannick Carrasco broke the deadlock just seconds after the restart but Sporting hit back almost immediately to level and only a strong reaction save from Miguel Angel Moya stopped Sergio Alvarez from doubling his tally.

Antoine Griezmann had a goal disallowed for offside but he set up Gameiro for the game's crucial third goal with 10 minutes to play, before Gameiro struck twice more in a clinical cameo that ended a goal drought in LaLiga stretching back to November.

The win sees Atleti close to within a point of third-place Sevilla and will give them confidence ahead of their Champions League clash with Bayer Leverkusen on Tuesday, while Sporting remain 18th.

Chances were scarce in a combative first half that was short on attacking quality, although it took a timely challenge from Lucas Hernandez to deny Traore a clear opening after the striker muscled his way towards the six-yard box.

The noise levels in El Molinon rose as Sporting's pressure began to mount late in the half, and Traore missed a second opportunity when his first-time effort following a Moi Gomez cross clipped the outside of Moya's right-hand post.

The match might have been far from enthralling in the first half but it roared into life within three minutes of the second.

Thirteen seconds after the restart, Gabi's long ball was flicked on by Fernando Torres and into the path of Carrasco, and although Ivan Cuellar blocked his initial effort, the Belgian followed up to smash the ball in from on the line.

Sporting promptly pushed forward for a response and they got it with the next attack of the game. Burgui's cross from the left found its way to Alvarez, who took a touch before firing a controlled half-volley through the crowded six-yard box and into the net.

Alvarez came close to putting Sporting ahead twice in the next 10 minutes, with Moya clawing one effort off the line before the midfielder met a Douglas Costa cross but could only steer it up and onto the roof of the net.

Substitute Saul Niguez brought a save from Cuellar with a header at the other end, before Griezmann - who had been kept firmly on the fringes of proceedings - controlled the ball before prodding it into the bottom corner only to see the offside flag raised for the narrowest of infringements.

But just as it looked as though Sporting would see the game out for an important point, Gameiro struck in clinical fashion, latching onto Griezmann's devilish reverse pass before rounding Cuellar and slotting home.

A minute later, Thomas Partey charged down a clearance and sent Gameiro into the penalty area, where the striker fired low across goal and into the bottom-left corner of the net, and he completed his remarkable hat-trick when he raced in behind the static Sporting defence and placed the ball into the same spot.