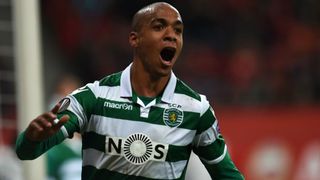 The father of Joao Mario has claimed Sporting CP rejected significant bids from Inter and Liverpool for the Portugal international.

The 23-year-old has been the subject of heavy transfer speculation after his excellent performances in his country's surprise triumph at Euro 2016.

The midfielder's father has now said a €35million offer from Inter - potentially rising to €45m - and a €40m bid from Jurgen Klopp's Liverpool have been turned down by the club.

"Proposals for the boy don't come directly to me," he told Diario de Noticias. "They go to his agent, Kia Joorabchian, and the Sporting president.

"I was informed, however, that the club said no to €35m plus €10m in bonuses from Inter and to €40m from Liverpool.

"Nothing specific has happened, my son is a professional and knows he has a contract with Sporting.

"At the same time, we're talking about a very valuable player for the club, who aspires to bigger projects during his career.

"I never said Sporting was not a project he liked. On the contrary, he's always shown an interest in their ... project."

A product of Sporting's academy, who was previously in Porto's youth set-up, Joao Mario scored six goals and registered 11 assists as Jorge Jesus' side finished second to Benfica in the Primeira Liga last season.