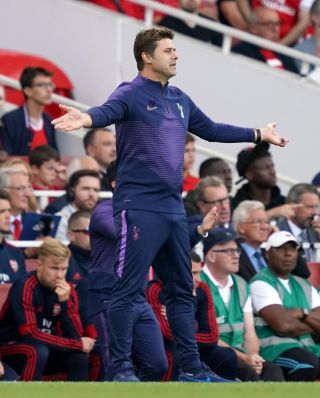 Mauricio Pochettino is confident Christian Eriksen will still be at Tottenham after the European transfer window closes on Monday.

The Dane’s future has been up in the air all summer after he said he was looking for a fresh challenge as he entered the final year of his contract, but a move to a top European club has not materialised.

Pochettino, speaking after Sunday’s 2-2 north London derby draw at Arsenal, could not give a 100 per cent guarantee there would not be a late twist in the tale, but reckons time is on Spurs’ side.

“No, there are still hours or one day. I want to say it is going to be impossible, but it is going to be difficult (for him to leave),” the Argentinian said of Eriksen, who opened the scoring at the Emirates Stadium.

“I think nothing is impossible in football, but the most important thing is that it is only 24 hours and I hope that everything will be clear for everyone.”

Pochettino has long complained about the European transfer window causing a number of his players, including Eriksen and Jan Vertonghen, to be unsettled, but hopes this can allow the club to hit the reset button and move forward.

“I was a little bit worried about the situation, because we knew very well what was going on,” he said.

“I am optimistic, happy. What is most important is to all be on the same page, with the club.

“That players have a clear idea where we want to arrive and how we want to move, clear minds like today, Christian and different players. (On Monday) they’re only going to be focused on Tottenham, not on thinking about different things that make management so difficult.”

As well as toasting the closing transfer window, Spurs could also have been celebrating three points at Arsenal having led 2-0 in a thrilling north London derby.

Eriksen scored his 50th Premier League goal by tapping in from close range and then Harry Kane’s penalty – his 10th goal in 10 games against Arsenal – doubled the visitors’ lead.

But the Gunners crucially got one back on the stroke of half-time through Alexandre Lacazette and then Pierre-Emerick Aubameyang’s equaliser earned a point.

Pochettino was left to rue the Lacazette goal deep into first-half stoppage time.

“That goal that we conceded in the last action of the first half gave the belief to Arsenal,” he said.

“Of course it was a big emotional hit for us because from here in one action you were down. For them the same they were down and suddenly their emotion was high and the belief in football is about emotions.

“For sure if we don’t concede at the end of the first half I think we will win the game.

“Overall, the most important for us is not the table, not the points, it’s the performance. We have recovered the good feelings after Newcastle and a very tough summer – all that happened in these last four weeks. That is the most important.”

The point was the least Arsenal deserved as they were camped in Tottenham’s half after the break, and boss Unai Emery felt his side could have won.

“Obviously after 2-0 we can be very proud of our response and how our supporters pushed us to get the second goal,” he said.

“The result I think we deserved more. We controlled the second half better than the first half.

“After the first 20, 25 minutes it was very good at the beginning. That second goal gave us difficult moments but the players worked very well to recover the result for us and our fans.

“We created a very good atmosphere. The game was amazing for the football but for us it’s not enough.

“I am very proud of our work, our players and our supporters. We need to continue working to develop the balance defensively in that moment.

“We played going against them and finding our option in the attacking third to score and win the match.”