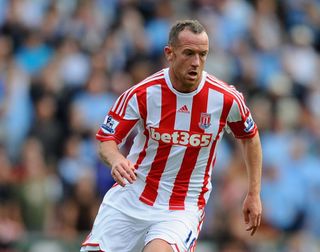 Reports in the English media suggested certain members of Tottenham's squad were considering refusing to acknowledge the Scotland international at the Britannia Stadium in the customary pre-match gesture due to a series of high-profile incidents.

Adam angered the north Londoners with a challenge on Paulinho that left the Brazilian sidelined for a month with ankle ligament damage earlier  this season, having previously irked Tottenham when he made two separate challenges on their former winger Gareth Bale - first while at Blackpool and then later during his time at Liverpool.

However, Sherwood dismissed the possibility of Adam being snubbed.

"I am aware of the reports and it is nonsense," he said. "The players will do their duty and shake hands along that line to show respect to their opponents.

"I have not heard the boys talking about Charlie Adam at all. They are just concentrating on the game. I don't think it is a problem at all.

"I would hate to think every time I tackled badly the opponent would not shake my hand. I would never have had a handshake."

Sherwood urged his side to focus purely on their own task rather than concern themselves with facing Adam.

He added: "Charlie is a combative player and he tries to do his job the best he can. I like my players to do the same. Sometimes you mistime them, but you get on with the game. It is part and parcel of it, unfortunately.