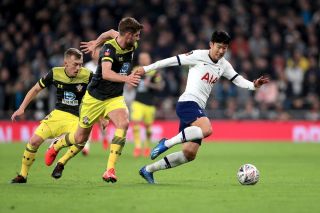 Tottenham needed a late rescue act to book their spot in the FA Cup fifth round as they beat Southampton 3-2 in the fourth-round replay.

Jose Mourinho’s men looked to be heading out of the competition with less than 20 minutes remaining as Saints goals from Shane Long and Danny Ings overturned an early Jack Stephens own goal.

Spurs rallied when they needed to, though, with Lucas Moura and Son Heung-min – the two men asked to step up in the absence of Harry Kane – scoring the goals that sets up a home tie with Norwich next month.

A quarter-final spot will be at stake in that match and Mourinho will be viewing this competition as a great chance to get some early silverware at Spurs.

There was a sad moment for Spurs as Jan Vertonghen appeared close to tears after being tactically substituted in the second half.

The 32-year-old, who is out of contract in the summer, has been exposed on a number of occasions this season and had the look of a man who knows his days at Spurs could be numbered.

Southampton will be wondering what happened as they had been by far the better side, yet collapsed after going in front, and they are now left to focus on pushing for a Europa League place in the Premier League.

Having seen Ings and Nathan Redmond shoot straight at Hugo Lloris in the opening 10 minutes, Spurs were the recipients of a large slice of luck at the other end as they took the lead.

Harry Winks’ long ball allowed Ryan Sessegnon to burst into the box, but Stephens brilliantly denied him a shot with a sliding tackle.

However, he was not rewarded as the ball fell to Tanguy Ndombele on the edge of the area and the Frenchman’s shot, which was going wide, cannoned off Stephens on the floor and into the bottom corner.

It was cruel on Southampton but they were not deterred and continued to create regular chances.

One of them fell to Ings and he would have expected to score as James Ward-Prowse’s long ball sent him in on goal, but the in-form striker hit the crossbar.

The deserved equaliser came in the 34th minute as Saints sliced their visitors open again.

Redmond was given too much space to get a shot away, which Lloris could only parry into the path of Long, who made no mistake with the rebound.

The second half started in a similar fashion and only a bad miss by Sofiane Boufal stopped the visitors taking the lead as he scuffed his shot at the far post and could not even hit the target.

Spurs had been virtually non-existent as an attacking threat, yet they created a brilliant chance to go in front as Son’s cross was begging to be headed home by Moura, but five yards out in the middle of the goal he somehow put it wide.

That was a fleeting moment for Spurs as Southampton continued to look the most likely, with Jannik Vestergaard forcing Lloris into a flying save with a header.

And they finally went ahead 18 minutes from time with a breakaway goal of stunning quality.

Redmond, picking the ball up on the edge of his own area, beat four men before sliding in Ings, who cut inside and clinically found the bottom corner.

It looked desperate for Spurs, but to their credit they mounted a fine response, inspired by Dele Alli.

The substitute first played a one-two with Moura, before the Brazilian created some pace and fired into the bottom corner.

They then won it in the 88th minute as Son scored his fourth goal in four games.

A fast break saw Alli play the South Korean in, he rounded goalkeeper Angus Gunn, but was brought down and referee David Coote pointed to the spot.

Son was the man who converted as Spurs edged through to the next round.