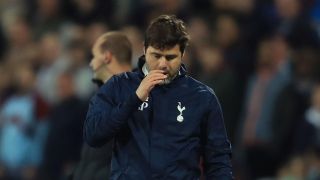 Manuel Lanzini's 65th-minute goal sealed a 1-0 win for the hosts at London Stadium and put Chelsea on the brink of glory.

Antonio Conte's men are in action twice before Spurs play again and, if they beat Middlesbrough and West Brom, they will be champions before Pochettino's side return to action next Sunday at home to Manchester United.

"Now we must wait for the Chelsea result and then there are three games ahead to play.

"I think you all know that now it is more difficult to try to catch Chelsea. But we need to try – always to the end, always."

Pochettino felt Spurs were unfortunate to lose but conceded they failed to reach the levels they displayed in last weekend's authoritative 2-0 north London derby win over Arsenal.

"I think in the first half we dominated but created few clear chances to score," he said.

Mauricio: "We're all disappointed. We didn't show the same performance as against Arsenal." May 5, 2017

"We deserved more. In the second half we started a little bit sloppy and conceded more space to them

"When you are fighting for the title you cannot concede those type of goals. Then they played deeper with 5-4-1 and it was difficult to find the space.

"We were a little but unlucky, I don't think we deserved to lose but we lost.

"It was a difficult game, it's true that if you compare it with five days ago against Arsenal it was not the same performance that we played last week.

"All the players are disappointed about that. Sometimes in football that situation happens. Now we must try to be ready for the next game."

Having mounted a sustained challenge in vain to Leicester City last season, Spurs find themselves in a familiar but unwelcome position.

But their manager rejected the notion that a team who had nine Premier League wins in succession to their name before facing West Ham had buckled under pressure.

"In football there are a lot of topics that make me laugh," Pochettino added. "We arrived at West Ham after nine games in a row.

"I have listened about that [pressure] for many, many weeks. Maybe when you lose it is because of the pressure or a bad performance.

"You can find many reasons why we lose. The reality is we didn't score."