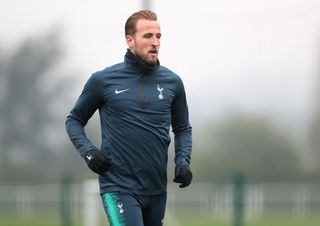 Tottenham striker Harry Kane is “ready to go” for the Champions League final after returning to full training.

Kane’s fitness has been the subject of much attention after he suffered a “significant” ankle ligament injury in the first leg of the quarter-final against Manchester City.

The England captain, who has a track record of speedy recoveries from similar injuries, is back involved with the main group and has declared his availability for Saturday’s showpiece event against Liverpool in Madrid.

“I feel good. I started to feel my way back with the team at the end of last week,” he said.

“There have been no problems so far. For me this week now is to get the fitness as high as possible.

“Then it’s down to the manager. Like I said, I feel good. The manager will assess it and decide whether I’m ready to go or not. But so far, I feel good and ready.

“I did a lot of work on my own to get me into a good place to go back with the team.

“Since I’ve been with them, I’ve been full training, doing everything.

“I’m at a place now where I’m ready to go for any game but again, it’s down to the manager.”

While many people have been cursing the three-week gap between the final Premier League game of the season and the Champions League final, it has actually helped Spurs as it has given Kane, Harry Winks, Jan Vertonghen and Davinson Sanchez time to get fit.

“Having the three-week gap after the end of the season definitely helped,” he said. “From when it happened, I could put a plan in place to be ready for this game.

“We took our time with it. We’ve had longer than we had for the other ankle injuries. It’s worked out well. So I slowly took my time and now I’m in a good place.”

Kane has been on the sidelines as Spurs navigated the quarter-finals and semi-finals in the most dramatic of circumstances.

He watched the memorable quarter-final second leg against City at home, and promptly posted his celebration on social media, and was in Amsterdam for the famous comeback against Ajax, where he ran on to the pitch at the end of the match.

Kane admits he is not the best spectator.

“It’s so hard watching as a fan because you’ve got no control,” he said. “The first, the Man City game, I was watching at home with one of my friends and my dad and the emotions of that game were just crazy.

“We were so up and down. When Raheem (Sterling) scored, one of my mates just left the room. Then all of a sudden we were crawling back. It was just crazy.

“Of course for the Ajax game I was there in the stands surrounded by Ajax fans. I was in the directors’ bit. The first half was good for them….

“Slowly it started to change and right at the end I said to Davinson (Sanchez), let’s go down and be with the team as it looked like the whistle was going to go.