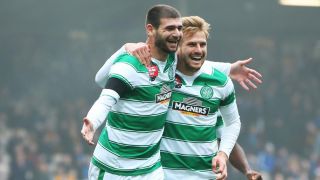 A goal in each half from Nadir Ciftci helped Celtic to a comfortable 3-0 win away to St Johnstone in the Scottish Premiership on Sunday.

The striker gave the champions reward for their first-half pressure with an emphatic finish just before the break, and Dedryck Boyata rose highest to head home a corner three minutes into the second half.

Ciftci nodded in Mikael Lustig's cross on 66 minutes to complete the scoring and allow Celtic to ease to a victory which restores their four-point lead over Aberdeen at the top of the table.

Michael O'Halloran missed a good early chance for St Johnstone and they were made to pay for their profligacy as Ciftci blasted home following Callum McGregor's cross 10 minutes before half-time.

McGregor was the provider once again for the second, with Boyata meeting his corner with a powerful header from close range which gave Alan Mannus no chance.

St Johnstone's Brian Easton rattled the post with a great effort from distance just a minute later, but Ciftci killed off any lingering hopes of a comeback with a precise header from Lustig's delivery.

Carlton Cole came close to a fourth in injury time as Celtic restored their advantage over Aberdeen, having played a game less than the second-placed side.