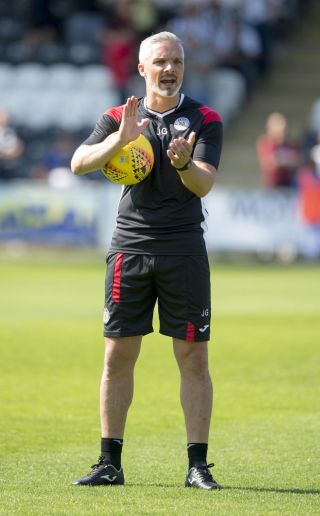 Jim Goodwin will give little thought to the Ladbrokes Premiership table when his St Mirren side host fellow strugglers St Johnstone on Saturday.

The Buddies are without a win in six and just one point ahead of bottom side Saints after eight league fixtures.

However, Goodwin is not contemplating the possibility of ending the weekend at the bottom of the table.

“We’re not approaching the game in that mind set, we’re trying to come up with a game plan that is going to go and win the game for us, it’s as simple as that,” said Goodwin, Goodwin, who will be without Kyle McAllister again as he recovers from a back injury.

“If it was a couple of games to go in the season and this was the situation, of course it’s probably a different kind of mind mind set. It becomes a must-not-lose game.

“At this early stage of the season I don’t think we can we can think like that. We have to approach the game in a positive manner and try and take the game to St Johnstone and try and be on the front foot.

“As the home team that’s what will be expected of us and that’s what the supporters will demand and I think by playing that way it gives us a better chance of winning the game.”

St Johnstone have just four points and have yet to win a league game this season.

However, Goodwin remains an admirer of the McDiarmid Park club and boss Tommy Wright.

He said: I have a great amount of respect for Tommy Wright and everything that he has done there at St Johnstone over the years he has been there.

“It actually gives clubs like ourselves a bit of inspiration as well when you consider how often he had them in the top six on a similar budget to ourselves.

“They’ve obviously had a slow start. I’m sure Tommy is doing all he can to try and rectify that issue and it should make for a good game.

“I think there’s two good teams going head to head I think we both could easily be a couple of places higher on the table.

“I watched St Johnstone’s last two games over the international break and I thought, on both occasions, they were better than Ross County and Motherwell on the day and could easily have won both those games.

“So, the fact that they are sitting below us at the bottom of the table doesn’t make me think it is going to be an easy game, certainly not.

“They’ve got some very, very good players in their team and a vastly experienced manager as well so it’s going to be a tough task, no doubt about that.”