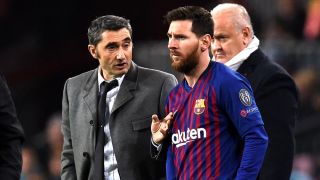 Barcelona surprised few by announcing a contract extension for coach Ernesto Valverde on Friday, a just reward for a strong start to life at Camp Nou.

Valverde, 55, is in his second season at the helm in Catalonia having joined from Athletic Bilbao, and he has been an instant success.

Barca won LaLiga and the Copa del Rey in Valverde's first campaign, while they look on course to at least repeat that double this season, sitting six points clear at the summit with a Copa semi-final second leg at Real Madrid to look forward to.

Club president Josep Maria Bartomeu said earlier in the week that he had no doubts about Valverde and was adamant he was to remain in charge next term – a sentiment confirmed by Friday's announcement, as the coach signed a one-year extension with the option of a further season.

Valverde is not the visionary many feel Pep Guardiola is, nor was his team convincing in the Champions League last year, but Barca's faith is surely well-placed for several reasons.

One thing no one can doubt about Valverde's time at Barca has been his use of talisman Lionel Messi. The Argentine scored 34 goals in 36 LaLiga games last term, while he has 21 in 21 appearances this season. The coach has got the very best from his star man, making him the centre of everything they do. System-wise, the team is perhaps more rigid and calculated under Valverde than it had been for a while – but Messi retains freedom and that has produced fine results.

When you realise you have to face #Messi in training   pic.twitter.com/2N0ANtLOYM— FC Barcelona (@FCBarcelona) February 14, 2019

Valverde has had to contend with a complete lack of organisation and direction from those in charge of the club's recruitment, and he was dealt a devastating blow in losing Neymar to Paris Saint-Germain soon after joining Barca. The head coach was reportedly unhappy with the departure of former sporting director Robert Fernandez, while the signing of Malcom is said to have been done without his consultation. On top of that, Paulinho's sale apparently frustrated him and a host of other arrivals have made little impact as yet - namely Philippe Coutinho, Nelson Semedo, Jeison Murillo, Kevin-Prince Boateng and Arturo Vidal. Still Valverde thrives, however.

Stability in a chaotic world

No one is going to claim Valverde is in a class of his own, a coach who will revolutionise the modern game. He is not a Johan Cruyff, or a Guardiola, and his teams do not play swashbuckling, all-out attacking football that has the masses watching in astonishment. However, the Champions League aside, his system has unequivocally worked at Barca, bringing two major trophies and there is every chance he will add to that tally this season. It would be all too easy to ditch him for a shiny new toy, much like Madrid with Julen Lopetegui earlier in the campaign, but stability in the cut-throat environment of modern football can only be a good thing in this situation.