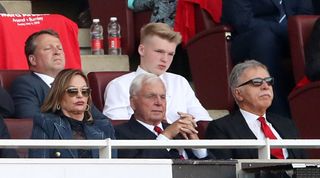 The Gunners were busy as they brought in Nicolas Pepe, David Luiz, Kieran Tierney, Gabriel Martinelli and William Saliba for north of £100 million.

According to the Mirror, industry insiders are sure that Kroenke stepped in with millions of his own cash instead of relying on the club’s self-sustaining transfer model.

Arsenal usually operate cautiously, keeping a “slush fund” of cash to reassure the banks in case they fail to qualify for Europe.

But Kroenke has bought out Alisher Usmanov’s 30 per cent stake in the Emirates club and this could change how things are run after he appeared to have offer increased personal backing.

His son Josh Kroenke, a director at the club, said on Thursday that Arsenal’s summer business proves that the club still has an “aura”.