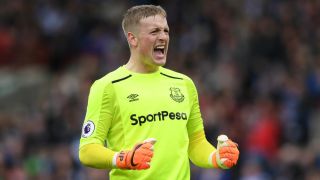 Maarten Stekelenburg has vowed to push Everton team-mate Jordan Pickford into maintaining his standards after signing a new contract.

Pickford, 24, played every Premier League match for the Toffees last term and went on to star in England's run to the World Cup semi-finals.

The goalkeeper's form consigned the experienced Stekelenburg to the role of back-up in his second season at Goodison Park.

But the 35-year-old Netherlands international, who was handed a new two-year deal on Monday, has resolved to do everything possible to keep the number one on his toes.

"Jordan had a very good 2017-18 season and played superbly as well for England at the World Cup," Stekelenburg told his club's website.

"I understand my role and I will try to compete with Jordan and push him to continue to get better as well.

"For me, it was tough last year because I had an injury and it took me a few months to come back from that.

"But I'm fit now, I've played in our pre-season games and I'm very much looking forward to Jordan getting back here so we can push one another."

Everton are expected to open contract discussions with Pickford in an attempt to ward off reported interest from Premier League rivals Chelsea.

Pickford joined from Sunderland last June for an initial £25million that could rise to £30m.