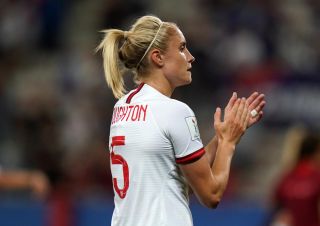 England captain Steph Houghton feels momentum is building nicely for the Lionesses heading into the last 16 at the Women’s World Cup.

The centre-back says it is a good thing that while Phil Neville’s side won all three of their matches in Group D, “we know we can play better.”

Already qualified for the next round and needing a point to cement top spot in their pool, England did so with a 2-0 victory over Japan in Nice on Wednesday, having already defeated Scotland 2-1 and Argentina 1-0.

Their last-16 match will be on Sunday in Valenciennes, with their opponents – one of the third-placed finishers – to be confirmed on Thursday.

Top of the table heading into the last 16. Exactly where we want to be.#Lionessespic.twitter.com/vzLcDGRNQr— Lionesses (@Lionesses) June 19, 2019

Asked for her assessment of how the group stage had gone, Houghton said: “We’re really happy.

“Three big wins. I don’t think you can ever really call a performance perfect. I think there’s always going to be times when the other team has the upper hand.

“But the thing is, we know we can play better, which is a good thing.

“I think when it gets to this World Cup stage, playing against these sorts of opponents, it’s important to make sure we win, no matter what, and I feel as though there have been glimpses of what we can do with the ball.

Into the last 16 we go! Professional performance from the whole squad + @Jodes_14 with the winner! ⚽️Now focus turns to Japan! 🦁🦁🦁@england fans you were amazing! pic.twitter.com/wSP66rSMpx— Steph Houghton MBE (@stephhoughton2) June 15, 2019

“The momentum is coming along nicely. I think everybody is getting excited and as players we feel like we’re in a good position where we can look forward to the game on Sunday.”

Ellen White put England ahead at the Allianz Riviera with a cool finish in the 14th minute, shortly after goalkeeper Karen Bardsley had superbly tipped a Kumi Yokoyama free-kick on to the bar.

Bardsley’s counterpart Ayaka Yamashita subsequently made a number of fine saves, then Japan threatened to equalise – with Houghton at one point executing a perfectly-timed tackle in the box to take the ball away from Yuika Sugasawa – before White slotted in her second with six minutes of normal time remaining.

Forward White now has three goals at the tournament. Both she and Houghton are at their third World Cup finals, and the pair will be club-mates next season, with White having joined Manchester City last month.

Houghton said: “Ellen is an unbelievable professional, she’s so bubbly around camp and when she gets those chances in front of goal we know she’ll score them.

“You saw her two finishes last night – unbelievable, with her left foot as well.”

While England sealed top spot in the group, Scotland – needing to beat Argentina in Paris to have a chance of progressing – were eliminated as they drew 3-3, having been 3-0 up.

Argentina’s third goal was a retaken Florencia Bonsegundo penalty in stoppage time, with the original being saved by Lee Alexander only for it to be ruled, after the use of VAR, that the goalkeeper had moved both feet off the line.

Houghton said of Scotland: “I have friends on the team and obviously you want them to do well, to shine on a world stage. Ultimately, that’s football – when you have a three-goal lead, it’s important you try to hang on to that. I’m obviously gutted for them.”

When asked if she was worried about VAR and the law changes that came into effect on June 1, Houghton said: “No. We’ve had the meetings with the referees. We know what it’s all about, that no matter what, you can’t complain about it. It is what it is. For us as a squad we’ve accepted that.

“It has gone with us for the last few occasions, but at the same time we know potentially it might go against us. But we have to make sure we go and win the game first and foremost and hopefully it doesn’t come to that.”