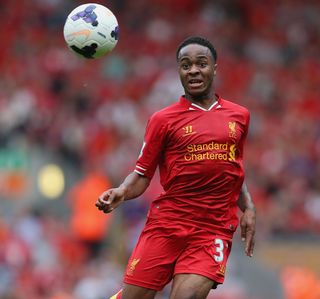 The 18-year-old has mainly been utilised as a substitute this season, with six of his seven Premier League appearances coming from the bench.

That follows a breakthrough season in which Sterling made 19 starts and five as a sub in England's top flight.

And the England international admits he would like more playing time and is particularly keen to aid the blossoming strike partnership between Sturridge and Suarez, who have 10 Premier League goals between them in 2013-14.

Speaking to the club's official website, he said: "I've not played as much as I'd have liked to, but the team are doing well and that's the most important thing at this moment in time.

"I can definitely learn from Sturridge and Suarez.

"They've taken this season by storm and their link-up play feels like they've been playing together for a good few years now. But it's only been a short amount of time and I'm sure as time goes on they'll improve together.

"I haven't had much of a chance to (play alongside them) this season, but in training you can see what they are both about. They're quick, sharp and they play one-twos around the edge of the box.

"They're both clinical and both really good players. So I'm really looking forward to playing with them."

Sterling's only start for the club in the league this term came in a 3-1 home victory over Crystal Palace, where he operated in an unfamiliar role of wing-back.

And while Sterling confesses it is not a position he would choose to play, he insists he is a team player.

"As a professional footballer you've got to learn to play in a few different positions," he added.

"I've had to play right wing-back a few times this season. It's not my favourite position, but if the team ask me to do a job, then no problem. I'm more than comfortable and happy to play there.

"The manager said this formation (3-5-2) suits the players we have and it does because we've got two full-backs in Glen Johnson and Jose Enrique, who can fly down the wings on both sides."