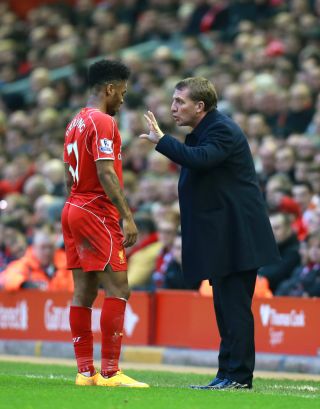 Leicester boss Brendan Rogers has been impressed by Raheem Sterling’s handling of the spotlight and expects him to get even better.

The Manchester City forward has been the focus of headlines on and off the pitch this season.

In December, Sterling criticised the coverage black players receive in the media and in March he was vocal in his condemnation of the racist abuse directed at team-mates Danny Rose and Callum Hudson-Odoi during England’s win in Montenegro.

Rodgers gave Sterling his professional debut at Liverpool when the forward was just 17 and he has been impressed with his maturity.

“I think he’s coped with the expectation really well. There’s been a lot of unjust negativity around the young player for no reason,” he said.

“He’s one of the leading British and English talents. That is clear to
see but it always seemed there was a negative role about Raheem.

“If you take all of that away and just focus on the football it’s
clear to see what his talent was.

“And to be playing for Liverpool at 17 and doing what he was doing for
me, I could put him in a number of positions that he could excel in
and this was in a team with (Luis) Suarez and (Philippe) Coutinho and (Steven) Gerrard and he was amazing.

“So he has fulfilled what he wanted to achieve and the light has been shone on him so unfairly for so many things and thankfully now it seems to have changed and now it’s purely on his football.”

The 24-year-old has scored 29 goals for club and country this season after netting 23 times last term as he continues to flourish under Pep Guardiola.

The ex-QPR trainee also netted his first England hat-trick against the Czech Republic in March and Rodgers can only see him improving.

He said: “He’s not even near his peak yet. In terms of being 24 he’s still at
that asset age and once he gets to 28 or 29 he’ll have played so many
more games and had so many more experiences.

“But his experiences now are going to make him even better.

“The big thing with Raheem is he is hungry to be the best he can be
and he’s been like that since he was a boy.

“I see that hunger in his game up to today. He keeps putting himself there and he’s just got that in-built game to be the best he can be and he will continue to grow and develop.”