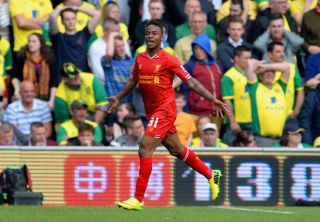 Sterling broke into Liverpool's first-team squad last season with a number of blistering performances, but suffered a slump in fortunes at the start of 2013-14 and fell out of favour in October and November.

But the 19-year-old, who is a strong contender for Roy Hodgson's England squad for this year's FIFA World Cup, has bounced back since December with nine goals and five assists in the Premier League as Liverpool lead the way in the title race.

Sterling reckons time spent with sports psychiatrist Dr Steve Peters - who will form part of the England backroom staff for the World Cup - helped him rediscover his positive, attacking style of play.

"Maybe on the outside people had the impression I've always been really confident," the teenager told the Liverpool Echo.

"But after a good start (to last season) I started looking for easy options rather than taking a chance myself, beating a man, taking a shot on myself.

"I'd stopped being natural, all the things that I'd done which got me into the first team in the first place.

"You could look at the (Manchester) City goal as an example. I'm not trying to sound cheeky or over confident but three or four months ago I would have squared rather than take the responsibility all for myself.

"My goal was always to play for Liverpool when I first came here and maybe for a while I thought that goal was achieved because I was one of the lucky ones to do it. But you realise that is not enough. There always has to be the next challenge, to achieve things and win things – making your mark.

"From December time I realised I had to start stamping my personality, running with the ball, running into the box, making goals, scoring goals. Not playing with that barrier, not to be worried about making mistakes."

Sterling added that his sessions with Dr Peters do not fit the stereotypical idea of psychiatry and are often incredibly simple.

"The way he works is brilliant. At first I thought it wasn't for me. On the outside you might think it's complicated but all the messages are very straightforward," Sterling said.

"He understands the players and the emotional side of the game. What he says really helps you.

"We use a motto 'focus on the ball, focus on the team'. I had a meeting with him before the City game.

"I thought it was going to last 20-25 minutes. So I walked in, sat down and he just said: 'focus on the ball, focus on the team'. 'Is that it?' I asked him but it was really important."