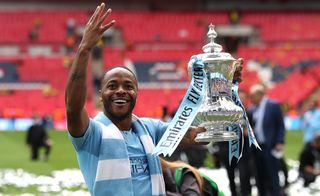 Sterling bagged a brace and was only denied a hat-trick by Manchester City’s second goal being awarded to Gabriel Jesus on review as Pep Guardiola’s men thrashed Watford 6-0.

City completed an unprecedented domestic treble with their FA Cup triumph, leaving Sterling to reflect on his changing times.

The 24-year-old has racked up 31 goals for club and country in a stunning campaign, while his outspoken fight against racism has elevated his standing to new heights.

Sterling grew up in Wembley’s shadow as a youngster hoping one day to grace the famous field – and revelled in steering City home on Saturday.

“Growing up here, growing up seeing this game billed, it’s a dream come true – coming on this field and winning trophies,” Sterling told the BBC.

“The boys were brilliant today. Everyone was fantastic. Credit to all the boys today, it’s been a fantastic year.

“It just shows what the manager’s building here. At the start of the season he said ‘Let’s try and get the mentality right and go for the Premier League again’, and we’ve done that again, exceptionally well.

“It’s a credit to all the boys, being mentally switched on throughout the season which has been long with the World Cup as well. Everyone’s been focused and on their A-game the whole way through.”

Captain Vincent Kompany admitted he felt privileged to be a part of City’s historic season.

“It wasn’t as easy as the score says but what a season, what a tremendous club,” Kompany told the BBC.

“It starts with the manager, who set the standard at the start of the season and said we had to go back-to-back, and then it’s the group.

“It’s a positive group, with young, talented players. You need quality, and that’s why we did it.

“It’s the best team in the world. To set such a high standard for such a long period, for two years running. What a team, what a privilege.”