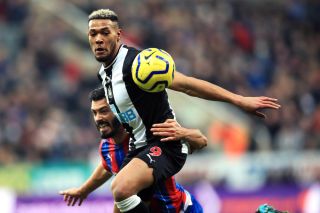 Newcastle head coach Steve Bruce has again given his backing to struggling striker Joelinton as he attempts to drag himself out of the doldrums.

The 23-year-old Brazilian cut a demoralised figure at the end of Saturday’s 1-1 FA Cup draw with League One Rochdale, during which he passed up a glorious opportunity to add to the lone goal he has scored in the 22 games he has played for the club since his £40million summer move from Hoffenheim.

His efforts at the Crown Oil Arena did not go down well with a section of the travelling support, but Bruce remains firmly in his corner ahead of Saturday’s difficult Premier League trip to Wolves.

He said: “No matter how he looks, always we’ve got the statistics to prove otherwise.

“In training and on match days, his physical statistics are very, very good. He’s going through that classic scenario of a striker who can’t score a goal.

“All of that gets heaped upon them, and it’s amazing what a goal does. His best performance was Tottenham away when he scored. That one he rolled against Rochdale, we need to roll into the net and hopefully, that will get him up and started again.”

Joelinton’s struggles, coupled with the lack of goals from fellow frontmen Miguel Almiron and Allan Saint-Maximin – the three have managed just four between them – have brought into sharp focus the Magpies’ lack of firepower.

They have been linked with a series of attacking players, including Chelsea pair Olivier Giroud and Michy Batshuayi and Red Bull Leipzig’s Ademola Lookman, with the January transfer window now open.

However, Bruce knows how difficult the market is and is not expecting to be particularly busy.

He said: “Look, there have been one or two sensational transfers over the years – [Virgil] Van Dijk was a January sale, I believe. There have been some sensational ones, but usually teams don’t want to sell their best players.

“They’re either fighting at one end or fighting at the other end, so it’s a difficult, difficult market and what you end up doing is looking at people who have fallen out with somebody, and that’s not usually a good thing either.”

In the meantime, Bruce will concentrate on the task of trying to end a run of three successive league defeats, although that will be easier said than done at Molineux despite the return of Paul Dummett, Ciaran Clark, Jetro Willems, Andy Carroll, Dwight Gayle and Almiron from injury.