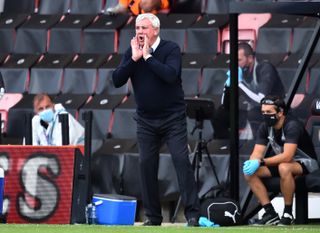 Steve Bruce will not allow Newcastle to coast to the Premier League finishing line after guiding them to safety with weeks to spare.

The Magpies’ 4-1 win at Bournemouth on Wednesday evening took them through the 40-point barrier and left them looking upwards rather than over their shoulders for what remains of the campaign.

However, head coach Bruce is in no mood to rest on his laurels with 18 more points still to play for.

He said: “We’ve achieved the first goal. A lot of people wrote the team and myself off in the first few weeks. I’m delighted for everybody we’re a Premier League team again, and that was the first job to be done.

“Now we’ve given ourselves the platform to see if we can mount a challenge and get in the top 10. If we can, that would be hugely satisfying.

“My job is to keep them focused on it. We’ve only got two or three weeks to the finish and we’ve got some big games coming up against some big teams. It’s still all to play for.

“The challenge for all of us is to make sure we keep the focus like we had the other day. Let’s enjoy the next few weeks and see where they take us.”

Victory over West Ham at St James’ Park on Sunday would see 13th-placed Newcastle match their 45-point tally for last season, although Bruce knows that will not come without a fight against David Moyes’ side, who gave their own survival hopes a major boost with a 3-2 victory over Chelsea on Wednesday.

He said: “Not many teams score three against Chelsea. They’ve just had a real confidence boost and produced arguably the result of the week.

“We know what to expect, this is how hard this Premier League is.”

The Hammers remain just three points clear of the drop zone, but Bruce believes Moyes – like him a former Sunderland boss – has what it will take to keep them up.

He said: “They’ve got a really top manager in Moyesy. They’ve got that as a bit of an advantage. He’ll know he wants to back up the win with another couple of positive results.

“They’ve had a great result. We know it’s going to be difficult.”