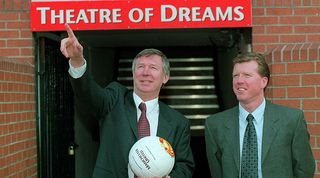 Former Manchester United assistant Steve McClaren says Roy Keane let him know what he thought of his post-match remarks after victory over Inter Milan in 1999.

McClaren had arrived at Old Trafford as Sir Alex Ferguson’s No.2 in January 1999, just months before the Red Devils went on to win a glorious treble.

United had beaten Inter Milan 2-0 in the first leg of their Champions League quarter-final at Old Trafford without playing particularly well and, as McClaren recalls, his post-match congratulations for the would-be champions did not go down well.

“It wasn’t a good performance and I think I came in and was a bit over the top by saying ‘Well done boys, great win’,” McClaren recalled during talkSPORT's documentary about United's treble-winning season.

“The first five months, from January up until the end of May, were the toughest five months of my life in whatever I’ve done,” McClaren continued.

“Nothing prepared me for them. The environment was tough, the players were tough. If a cone was out of place, a decision was wrong, they let you know. They wanted the best.”

McClaren also revealed that he beat former Manchester United manager David Moyes to the position as Ferguson’s assistant back then – although Fergie was hardly explicit with his demands at first.

“I do know there were a few people in the frame and it was David Moyes and myself at the top of the charts,” he said. “You’ll have to ask him why he picked me.

“We’d just won 8-1 on Saturday, and he (Ferguson) just said, ‘Look son, what did you used to do at Derby?’ And before I’d even got an answer out he said, ‘Whatever you did at Derby, that’s why you’re here'.”